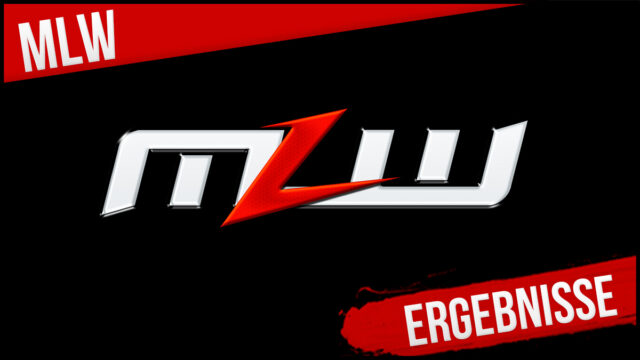 At the beginning of the show, we see Alex Hammerstone & EJ Nduka being asked by Emilio Sparks how Hammerstone’s ankle is doing. Sparks also turns to Richard Holliday, who rejects him because he is on the phone. Holliday speaks to « Max » and says he appreciates that he wants to be at the War Chamber Match. Cesar Duran shows up with his masked helper and asks if they want to join their War Chamber team. Hammerstone & Nduka don’t trust Duran and don’t want to make a deal with him. Duran complains that this could be the final fight between MLW and the Contra Unit. Hammerstone tells him to get to the point when he has someone to send into the match. Duran shows the key he wears around his neck.

The commentators Rich Bocchini & Joe Dombrowski welcome us to the show before it goes backstage, where Jacob Fatu freaks out and has to be held back by Atlas Security.

1. Match
6 Man Tag Team Match
Los Parks (LA Park, Hijo de LA Park & ​​LA Park Jr.) vs. 5150 (Homicide, Slice Boogie & Rivera w / Konnan, Julius Smokes) ended in a no contest after both teams had an uncontrolled fight and the referee stopped the action no longer had it under control.

Los Parks and 5150 continue fighting after the match.

A graphic announces the imminent debut of Gnarls Garvin.

Josef Samael explains in a video promo that Alex Hammerstone, Richard Holliday & EJ Nduka will not be able to hide in the War Chamber.

Backstage, the brawl continues between Los Parks and 5150.

Behind the scenes, Cesar Duran speaks to Willow Nightingale. She says she came to MLW to win the MLW Featherweight Championship. The masked helper comes to Duran with a message, who then apologizes and disappears.

A video hypothesizes the imminent arrival of NZO.

Jacob Fatu has snatched the masked helper in Cesar Duran’s office. But Duran manages to calm Fatu down.

In the coming week we will see the War Chamber Match.

Alicia Atout has Alexander Hammerstone, Richard Holliday & EJ Nduka with her for an interview. She reveals that Savio Vega is the fourth man on her War Chamber team, but the last man is not yet known. Nduka explains that Duran’s key symbolizes his brother. However, Duran’s brother has not been seen in years. (Editor’s note: NJPW star Jeff Cobb played the brother named Matanza on “Lucha Underground”.) Holliday is not happy that Savio Vega is on the team. Alicia Atout gets something whispered from Duran’s masked helper and then mentions that Holliday will get a chance at Hammerstone’s MLW Heavyweight Championship. Hammerstone and Holliday joke that they can’t trust each other anymore. Hammerstone then makes it clear, however, that Cesar Duran’s head game will not be successful because he voluntarily wants to defend his title against Richard Holliday & EJ Nduka as he wants to compete against the best. You will win the War Chamber Match no matter what Duran tries.

Discuss this show with fellow wrestling fans in our forum! Click!

Here you will find the current lottery numbers and odds from the lottery on Saturday every week. The chance of winning is low, however. The lottery numbers for Saturday, November 13th, 21: The winning numbers Lire la suite…

Charles and Camilla in Jordan – Panorama

Prince Charles and Duchess Camilla spend two days in Jordan. The program is extensive. Amman (AP) – On their first major trip abroad since the beginning of the corona pandemic, the British heir to the Lire la suite…

With these apps, devout singles can find great love

Online dating is very popular. imago/Panthermedia As with most dating platforms, you can get started quickly: answer a few questions about yourself, your hobbies and character, age and profession, upload a photo, done. You are Lire la suite…